Signature Drinks for the Kentucky Derby

If you are a fan of horse races, particularly the Kentucy Derby, you have most likely discovered the mint julep. This delicious cocktail is often spiked with bourbon, muddled with mint and sweetened with simple syrup. It is a delightfully refreshing drink that can improve any day at the track, win or lose.

The mint julep has been promoted by Churchill Downs, the racing complex known for hosting the Kentucky Derby, since 1938, but the origin story is thought to begin sometime during the 18th century in the southern United States. In the 19th century, the cocktail could also be found with gin as a primary ingredient, however, in modern times, the use of a bourbon base has wildly overtaken the use of gin.

This cocktail has grown in popularity due to the two-day experience of the Kentucky Oaks and the Kentucky Derby, resulting in roughly 120,000 mint juleps served each year. Since 1999, Woodford Reserve Bourbon has been the first and only official bourbon of the Kentucky Derby and graces each mint julep served during the race. As of 2006, you also have the opportunity to purchase an extra-premium custom-made mint julep for $1,000 each, with the proceeds supporting charitable causes for retired racehorses. These mint juleps are presented in gold-plated cups with silver straws, Woodford Reserve Bourbon, mint imported from Ireland, sugar from Australia and spring water ice cubes from the Bavarian Alps.

Express the essential oils in the mint and rub them inside the glass. To the same glass, add simple syrup, bourbon and crushed ice. Stir gently and garnish with mint leaves and powdered sugar.

Are you interested in keeping with tradition but looking to add something extra? Try one of the following recipes that take the classic mint julep to a whole new level. 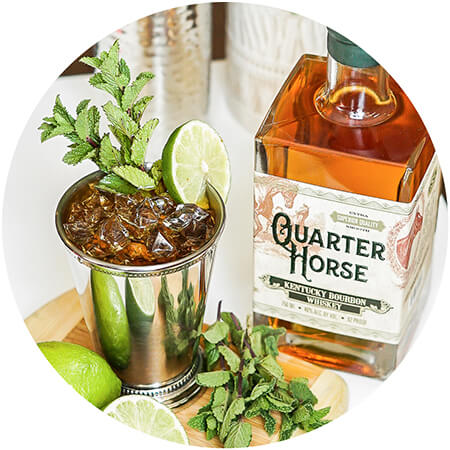 Made with Quarter Horse Kentucky Bourbon

Made with Misunderstood Ginger Spiced Whiskey

Made with Maker’s Mark Bourbon 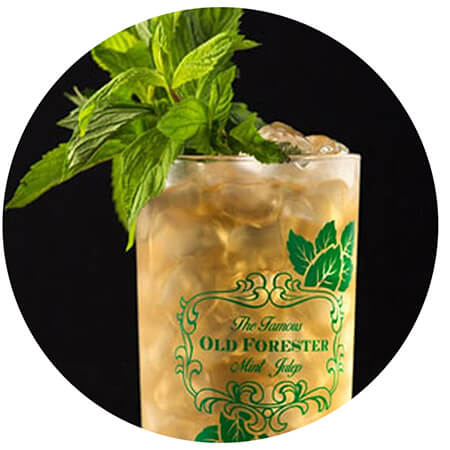 Made with Old Forester Bourbon 86 Proof