From Top Shelf to Bottom: The Surprising Results of a Blind Bourbon Taste Test

Moments of true excitement seem to become rarer for me with every passing year into adulthood, but I had the good fortune of experiencing one recently. On an otherwise mundane day, I received a text from Mary, my ABC Fine Wine & Spirits contact:

“Are you interested in doing an article on bourbon?”

I took a moment to ensure my reply was not too enthusiastic, similar to how one might play it cool before responding to a second date invitation.

I’m a firm believer that tastes change over time and frequent experimentation is the only way to know what one truly enjoys at any given time. Fortunately, I’ve acquired a sponsor in this pursuit. ABC has been kind enough to grant me bottles of various spirits that I might not normally encounter. My typical alcohol budget does not afford me the level of experimentation I might otherwise conduct.

Previously, I took a deep dive into tequila, a spirit that I had mostly ignored for a decade, and I came away with a far more positive opinion of it. This time the proposed spirit was bourbon - something I have plenty of experience with.

The request from Mary was quite straightforward. I was to be given samples of five different bourbons for a “blind taste test,” and my role was to simply give my opinions on each. Since I can’t seem to avoid giving my opinion on much of anything, this seemed like a perfect assignment.

We discussed logistics and some concerns - namely my familiarity with common brands that might be included in the five samples. Mary had her doubts that I had a discerning enough palate to distinguish one top shelf bourbon from another, which I had no choice but to take as a challenge. There was also the question of accountability: How does one issue a blind taste test to themselves? I considered asking my girlfriend to proctor at home, but ultimately decided to talk Mary into administering and documenting the proceedings.

Mary poured the samples and labeled them one through five before stashing the bottles out of sight. It was decided that the bourbons were all roughly equal in appearance once placed in glasses, so I was granted my vision for the remainder of the test. The five bourbons in question were a mix of ubiquitous brands and some you may not have heard of yet. I gave them each my own shelf ranking before the first taste.

Many of these are bourbons that the average person might make mixed drinks with or at least cut with a splash of water, but for the test I sipped them neat to get as clear a picture as possible. I resolved to try each glass in order, take notes and then to work my way back through the samples to take additional notes before drawing any conclusions. I also resolved to take full advantage of the sesame crackers in the bowl on the table to cleanse my palate between samples.

At this point, I had no idea what Mary poured in each glass.

After the first pass, I took a moment to smell each glass randomly, just grabbing around and getting a good whiff. All of them started to take on fairly sweet smells with overtones of maple, even though I initially only picked that up in sample three. It’s unclear whether this effect was the result of my rising blood-alcohol level, or if the bourbons actually started to smell sweeter once they aired out a bit. (Side note - don’t be afraid to employ a spittoon if you run a similar test at home, there’s no shame in it.) It was time for another pass at all of them and some additional notes:

After a few more random sips and some stalling, I was ready to make my educated guesses. I was fairly certain that glasses two and four were Knob Creek and Maker’s Mark respectively, but the others required some deductive reasoning. Since I had initially characterized sample one as smelling a little less refined than the others, I decided to guess that as Zackariah Harris. This left glasses three and five as mysteries and left me wishing I had consumed more Jim Beam in the past, so I was more familiar with its taste. I ultimately opted to guess glass five as Quarter Horse and glass three as Jim Beam since I seemed to recall Jim Beam being a little on the sweet side. As it turned out, that would be my only mistake. The actual order was:

So, I got three out of five, but at least I had correctly identified Maker’s Mark, thus negating a potential lifetime of ridicule from both my girlfriend and my ABC contact, Mary.

The big surprise here to me was Zackariah Harris, which was identified on initial impression alone and ended up being remarkably drinkable for such an inexpensive bourbon. I ended up pouring a few more sips that night and deciding to pick up another bottle next time I want an easy drink without breaking the bank.

Although I had transposed it with Jim Beam in the moment, I decided to give Quarter Horse a second chance the next day, since it was new to me. I found many of the same qualities I had identified during the test - namely that it smells a little sweet but doesn’t really taste it. In fact, it has a pretty subdued flavor overall and goes down very easy for a bourbon over 80 proof. This would be the type of bourbon that I might make mixed drinks with or serve to friends that don’t particularly like the smoky, burnt flavors that tend to accompany similar bottles. 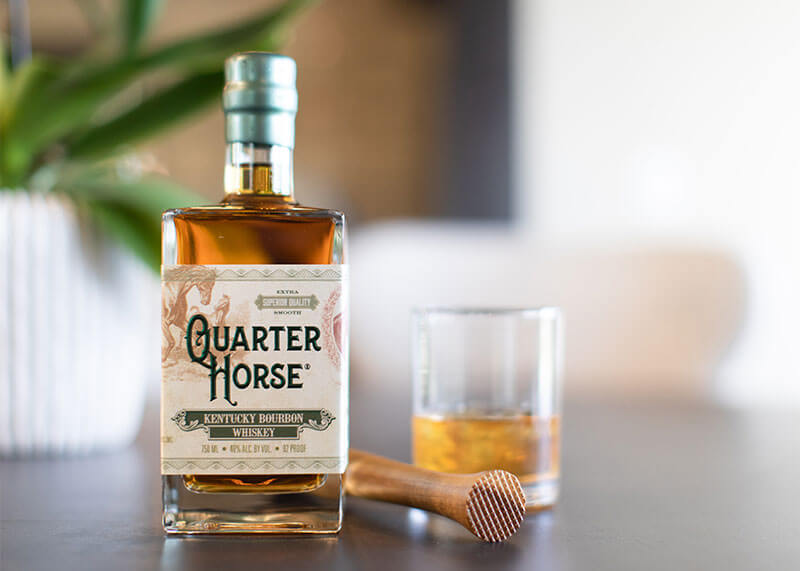 I enjoyed this little experiment, and I would recommend that even experienced drinkers of bourbon (or any other spirit) try some sort of blind taste test if they can. It’s a fun way to force yourself to slow down and really analyze what you’re drinking, plus it’s a great way to stock your bar with new bottles if you happen to have leftovers. You might be surprised what you learn about yourself and your own tastes. More importantly there’s a good chance that no matter what your preferred spirit is, there’s a bottle you’ve never tried that could become your favorite if you simply gave it a chance. No one can be truly sure of what they like the most without trying all of the options first, and to me that means I have decades of experimentation left.

Shop our selection of bourbons for your personal, at-home blind taste test here.