History of the Mai Tai

The mai tai is a delicious rum-based cocktail that has come to be synonymous with tiki culture. For almost a century, vacation-ready drinkers have enjoyed this Polynesian-inspired punch which blends aged rum, orange curaçao and orgeat.

Since its 20th century origin, hundreds of variations of this cocktail have surfaced to transport eager drinkers to a temporary tropical oasis. Today, this tiki-themed concoction is featured on menus across the world but where did it get its start?

With clashing tales surrounding the drink’s true origin – the history of the mai tai has long mystified many cocktail connoisseurs. Join us as we unpack the magic and the mystery of the mai tai.

Origin of the Mai Tai – a Conflicting Claim to Tiki Greatness

There are conflicting claims over who first developed the mai tai between two Californian restaurateurs – Victor Jules Bergeron and Earnest Raymond Gantt.

Victor, who would eventually go by Trader Vic, owned a tiki-themed restaurant in Oakland, California that shared his well-earned nickname. With a few hundred dollars of borrowed capital, Victor opened his small restaurant and bar called Hinky Dink’s in 1934 opposite his parent’s small grocery store.1 Over time, the bar’s character transformed into a tiki-like den as Victor ‘traded’ cocktails and culinary extravagance for tropical trinkets brought in by bar guests - which he used to further create an authentic trans-Pacific theme. Vic’s rowdy charisma, colorful vocabulary, thrilling stories (like his flamboyant and fictional tale declaring his leg had been eaten by a shark), and easy-sipping drinks made him a popular barkeep and host.

By 1937, Victor renamed the restaurant Trader Vic’s to monetize his acquired moniker. From there, the restaurant’s success exploded along with the demand for his delicious cocktail creations – one of which was the mai tai. Allegedly, Vic concocted the famed drink in 1944 using a 17-year aged Jamaican rum.

According to Victor, “The flavor of this great rum wasn’t meant to be overpowered with heavy additions of fruit juices and flavorings. I took a fresh lime, added some orange curaçao from Holland, a dash of rock candy syrup, and a dollop of French orgeat, for its subtle almond flavor. A generous amount of shaved ice and vigorous shaking by hand produced the marriage I was after.”2

He maintained that he then served the shaken mixture to his visiting Tahitian friends, Carrie and Ham Guild, with a garnish of spent lime shell for color and a sprig of mint to depict an island. Victor recalls, “Carrie took one sip and said, ‘Mai Tai – Roa Ae’. In Tahitian this means ‘Out of This World – The Best.’ Well, that was that. I named the drink ‘Mai Tai.’”3

The recipe would become Trader Vic’s flagship cocktail, featuring the perfect balance of tropical flavors and subtle nuttiness. Victor insisted that the mai tai was his original recipe and said that anyone who didn’t believe the drink to be his creation was “a stinker.”4 Victor’s drink eventually became so popular that rum shortages compelled him to adjust the original mai tai recipe.

Add rum, lime juice, reserved lime half, curacao, orgeat syrup and simple syrup to a shaker with ice. Shake well. Strain into a glass filled with crushed ice. Garnish with a lime wedge and mint sprig.

By the 1950s, Vic introduced the mai tai to the Hawaiian Islands where he was creating a portfolio of tropical cocktails for a hotel chain. Soon after arriving, Victor decided to add tourist-friendly juices to appeal to an island audience, and the Royal Hawaiian Mai Tai was born.5

This unofficial drink of the islands eventually found favor over Vic’s original recipe. In fact, most restaurants today serve some version of the Royal Hawaiian Mai Tai that includes juice and different styles of rum, a far cry from Victor’s original version. 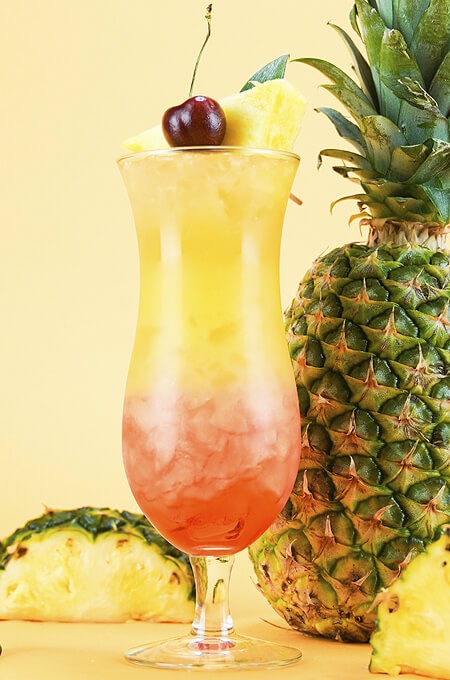 Add rums, triple sec, juices and syrup to a glass over crushed ice. Garnish with a cherry and pineapple wedge.

Down California’s Pacific Coast in Hollywood, Earnest Raymond Gantt was also solidifying his contributions to tiki culture. In 1933, Earnest opened a crude, shack-like bar adorned with tropical and nautical décor that he was rumored to have swiped from movie sets he had worked on. Following the end of Prohibition, Earnest served cheap rum drinks in the relaxed and unpretentious setting of “Don’s Beachcomber.6” As this small slice of tropical paradise grew in popularity, Earnest began calling himself Donn Beachcomber. Eventually, he legally changed his name to Donn Beach. Donn opened a second, larger location across the street to expand the bar space into a tiki-themed restaurant called Don the Beachcomber. Here he served up tropical fare and several other Donn Beach original rum drinks that he dubbed his Rhum Rhapsodies.7 These Polynesian-styled drinks were entirely novel to the States, and Southern California demanded more.

As more restaurants opened across California under the Beachcomber banner, patrons indulged in Donn’s rum cocktails, including the Sumatra Kula, Three Dots and a Dash, the Zombie, Tahitian Rum Punch, Cobra’s Fang, and, of course, the contested Mai Tai.

Donn claimed that Trader Vic’s Mai Tai was actually a knockoff and renaming of his previously crafted Q.B. Cooler.8 Whether Donn was the true brains behind the mai tai or not ,his creative rum-mixing fueled the tiki culture phenomenon which continued throughout the mid- and late-1900s. This unique consumerism culture is characterized by South Pacific-inspired art, entertainment, music, and dishes that lead to themed restaurants, resorts, and bars with alluring drinks and a vibrant tiki aesthetic.

We may never know who truly devised the mai tai and who was the copycat – it seems Vic and Donn have taken that information to the grave. However, it can be said with certainty that together, Trader Vic and Donn Beach laid the foundation for American tiki culture’s rise to fame long before Jimmy Buffett blew out his flip flop and dipped his toes into that lucrative business concept. For that, we raise our tiki glasses to them.

A Myriad of Mai Tais

After the introduction of the mai tai and the popularization of the Royal Hawaiian Mai Tai, bartenders have continued to experiment and create countless variations of the cocktail. Mixologists, canned cocktail companies, and restaurants alike have capitalized on the flavors and relaxed feeling of the mai tai to create their own versions of the drink:

Most recently, however, the mai tai is part of an exciting tiki renaissance that is rooted in retroism. The movement to revive the initial tiki culture of the 1930s is currently unfolding along with championing the return of the original mai tai recipe.

The next time you find yourself in the mood for a breezy rum concoction – try asking the bartender for the retro mai tai, or, better yet - stop by your local ABC store to grab all the goodies you need to shake up your own little getaway in a glass.

2 Trader Vic's history of the Mai Tai. The Search for the Ultimate Mai Tai. (n.d.). Retrieved June 13, 2022, from https://ultimatemaitai.com/about/history/vics-history/