There are many things that make malbec a marvelous, modest wine – most admirably, it somehow manages to capture the character of the winemakers that create it. Malbec wines are approachable, easy-going and charming. Also called Côt Noir in France or Auxerrios, the thick-skinned grape was introduced by a Hungarian named Sieur Malbak, to the Left Bank of Bordeaux in the 1700s. Sieur’s surname acted as the source of the earned eponym. Malbec was then planted in Cahors, east of Bordeaux and grew into the region’s champion grape further inland from the humid Atlantic air. However, a devastating frost in 1956 destroyed most of the vines and, at the time, there was more sense in replacing the fickle-growing malbec with more worthy, resilient varietals.

France’s climate never truly favored malbec and today it grows as more of a niche or blending grape. Malbec didn’t find its ideal home, or identity, until the 19th century when it was introduced to the New World. In France, malbec may be overshadowed, but in Argentina – it takes center stage. It seemed malbec wines simply needed the right terroir to transcend into greatness. Malbec wines gift a beautiful intermediate, value red wine. When comparing to other noble reds - the wine marries merlot’s mellowed tannins with cabernet’s rich, bold flavors. Malbec has borrowed and balanced both varietal’s desired characteristics. Bill Stobbs, our malbec wine specialist, added that, “…it [malbec] is softer and easier to drink, not to serious with all the right qualities.” The wines are a dynamic duo of both savory and fruit flavors. While each producing country or region will have climate distinct profiles – overall, malbec will be a medium to full bodied, fruit-forward wine that will allow for you to taste the terroir. First, on the nose, you are going to be met with fruit – mainly ripe dark berries and plum. You will find the fruit is then followed by molasses, dark chocolate, spice or sweet tobacco which tends to be the addition from the oak barrel aging. The palate is also dark and rich with fruit and smoke. Another malbec marker is the distinct magenta rim that halos the wine’s opaque purple color.

Old World French malbec often is rounder with red fruit flavors, lively acidity, and may feature notes of leather or even mint. Argentinian malbec is a fruit bomb featuring black berries with softer acidity and desirable opulence. Bill shares that Zuccardi Concreto Malbec is a personal favorite and a must try from Mendoza that consistently earns great ratings with an appealing price. Whether you are pouring a French or Argentinian malbec – serve at room temperature in a red wine glass.

Ready to taste? Browse our malbec labels on sale. 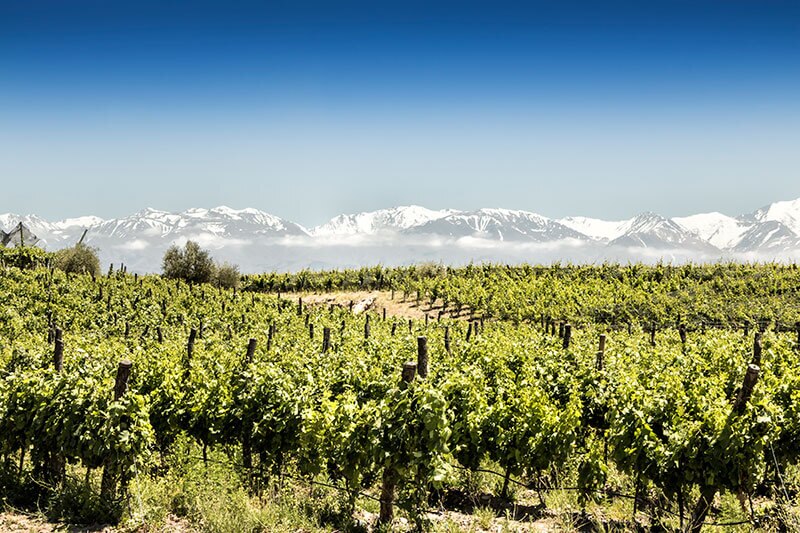 Today, malbec is primarily made in either Cahors, France or South America – principally in Mendoza. Cahors is located in Southwest France, is the native home to the grape, and remains a notable producer even through the grape’s growing woes. The grape, in France, is susceptible to weakness in the cool temperatures and humidity. Therefore, malbec primarily serves a supporting role as a blending grape for heavy hitters like red Bordeaux blends. However, Cahors still remains as a recognized region for malbec. Cahors’ distance from the Atlantic is more advantageous for the grape as it dislikes the damp air. Cahors has thrived as a winemaking region for centuries with its warm, sunny scenery where malbec is a mainstay. The river valley is also halved by the Lot River which nurtures the two vineyard regions – the limestone plateaus and the gravel terraces.

In South America, malbec is made in Argentina and Chile. Clippings were moved to Argentina in 1868 when Mendoza’s governor had enlisted the help of a French agronomist to diversify and elevate the country’s wines. Interestingly, the clone introduced to Mendoza has since disappeared in France. Today, 75 percent of the world’s malbec grapes grow in the Western Hemisphere. In Argentina, Mendoza is malbec’s chosen home and the malbec capital of the world producing easy-sipping, food-friendly red wines. Tucked at the foot of the Andes Mountains - the region is arguably Argentina’s most celebrated winemaking area. The climate, alluvial soil and dry altitude ward off many of the vulnerabilities that the grapes face in France. Just as malbec is known for being approachable, it is also reachable. Malbec is a perfect match for a range of full-flavored foods, dishes and even desserts. Bill Stobbs added that in his experience he has found, “…very often the wine that is produced in a region will pair together, very naturally, with the food of that region.” Argentina is synonymous with steak – so, of course, pairing a marbled, seared ribeye is a seriously delicious compliment. Also, due to the wine’s more moderate tannins – leaner meats are also a smart pair including lamb, pork or even poultry. To unlock and bring forward the wine’s herbal elements try layering a sage cream sauce. Aged cheddar cheeses, pecorino and blue cheese will make a magical play with malbec thanks to the interplay with salt and strong flavors.

If you already find yourself matched with malbec – Bill suggests continuing to explore Argentinian wines. He revealed that, “One of the problems, for better or worse, is that when people think of Argentinian wines, they only consider malbec. But winemakers produce other fantastic varietals like Cab Franc, or Shiraz that absolutely deserve attention.” While browsing the isles of ABC look for Lamadrid Cabernet Franc or Santa Julia Mountain Blend Malbec and Cabernet Franc.

“There is nothing like the rich, decadent flavor of a good malbec, especially paired with a filet or blue cheese. Because it’s so easy to drink and pairs well with a variety of flavors - a malbec is always a crowd-pleaser.”– Kara Hymel, ABC Customer