Hispanic Heritage Month, celebrated nationwide from September 15 to October 15, is a time to celebrate and honor Hispanic cultures. Through music, dance, language, cuisine, art, fashion and much more, Hispanic peoples show their national pride and enrich our cultural landscape.

While it might not be the first thing you think of, cocktails and mixed drinks are just as much a part of a culture’s history as its food. There are scores of delicious, traditional Hispanic cocktails from Latin America and the Caribbean with fascinating origin stories, but we’ve narrowed down the top eight Hispanic cocktails you should be mixing up at home. ¡Vamos!

The popular margarita has more than one alleged origin story. Some say Mexican bartender Carlos “Danny” Herrera created it in 1938 for Marjorie King, a Ziegfeld showgirl, who was said to be allergic to all hard spirits except tequila. Margaret Sames, a Texas socialite, also claims she concocted the drink in 1948 while vacationing in Acapulco; the story goes that it was so great that her hotelier friend Tommy Hilton even put it on the menus at his hotels.

Cocktail historian (yes, that’s a thing) David Wondrich agrees the margarita was created in the late 1940s, yet says it was derived from the popular cocktail, The Daisy, which in Spanish translates to margarita. Jose Cuervo has run ads promoting the drink since 1945, further complicating the timeline.

While we love the rich, mysterious history of this beloved cocktail, one question will forever be debated: Salt or no salt on the rim?

Need a margarita fix? Find our recipe below. We recommend using a tequila from our Sourced & Certified Collection, like Los Rijos. If this doesn’t fit your palate, check out our full collection of tequilas here.

Rim a glass in salt and set aside. In a shaker with ice, add tequila, triple sec, lime juice, and sweet & sour mix. Shake well and strain into prepared glass over fresh ice. Garnish with a lime wedge.

Similar to the margarita, the creation story behind the pisco sour is a little foggy. For starters, both Peru and Chile claim to have invented the drink, but because of publication dates, the European Commission has awarded the origins to Peru. Nonetheless, Chileans still enjoy the cocktail with minor tweaks to the recipe.

The most well-known story behind the pisco sour is that Victor Vaughen Morris, an American miner who moved to Peru, opened the Morris Bar and created the drink early in the 20th century. There is, however, a recipe in the Nuevo Manual de Cocina a la Criolla cookbook published in 1903 that depicts an almost identical recipe. The only difference is the cookbook’s version calls for sugar instead of simple syrup with no bitters and no name.

Whoever came up with the drink, we're just happy we get to enjoy it today. In a shaker with ice, add Pisco, lime juice, simple syrup and egg white. Shake well and strain into a glass over fresh ice. Garnish with 3 drops of bitters and a lime wheel.

If you’re an eggnog devotee, we’re about to put you onto your new favorite holiday drink: coquito.

Meaning “little coconut” in Spanish, this traditional Christmastime drink originated in Puerto Rico. It’s creamy and sweet like eggnog, but it doesn’t contain eggs and is instead flavored with coconut and spiked with rum. When Puerto Rican families start busting out the coquito, that’s how you know the holidays have arrived on the island.

Yes, you may have guessed it, the origin of this winter staple is unclear. It’s generally hypothesized that Spanish colonizers brought their version of eggnog, posset, to the island and combined it with the local Puerto Rican rum. These days, there are myriad varieties of coquito, from pumpkin spice to pineapple and Nutella and beyond.

The best way to experience this creamy, coconuty delight, in our opinion, is by trying the original. Try it for yourself and become the MVP of your next holiday gathering! Add rum, milks, salt and vanilla to a blender and blend until smooth. Refrigerate until ready to serve. Serve chilled in individual glasses garnished with ground cinnamon and a cinnamon stick.

Looking for pre-made coquito? A few rum distillers offer bottled coquito. Our team put them to a taste test in the video below.

“If you like piña coladas…” then you’re in the right place. The official drink of Puerto Rico was created by bartender Ramón “Monchito” Marrero in 1954 at the Caribe Hilton. The sweet and fruity blend of pineapple, cream and rum became a favorite overnight, and for 35 years Marrero himself served the drink at the hotel.

Just when you thought that was it for the history of this tropical cocktail, it is worth mentioning that a magazine published a piña colada recipe in 1922, but the ingredients were just pineapple juice, lime and sugar. Could it be that Morrero used this as an inspiration?

That has not been confirmed. All we know is we can’t imagine a trip to the beach or a pool day without this delicious, creamy concoction.

Add rum, pineapple juice, cream of coconut and ice to a blender. Blend on high speed for about 30 seconds, or until well blended. Pour into a glass and garnish with a pineapple slice.

When it comes to chilled drinks, the mojito is the poster boy for refreshing summer cocktails. Nothing comes close to this minty thirst-quencher, so it’s no surprise that a slew of stories exists surrounding its creation.

One popular theory traces the drink back to 1586 when Sir Francis Drake dropped anchor in Havana, Cuba. Drake was sponsored by Queen Elizabeth I to plunder Spanish cities in the New World for the crown. King Phillip II of Spain gave Cuba’s governor a heads up that Drake was likely coming to seize the Aztec gold in the city’s royal treasury. Havana was prepared for battle, but everyone was shocked when Drake sailed away after a few days and only firing a few shots.

Perhaps this major “Phew!” moment in Cuban history was momentous enough to name a drink after it. This is when “El Draque” (The Drake) came into fashion, a drink made with aguardiente de caña (a crude sugarcane spirit that was the grandpappy of rum), sugar, lime and mint.

Another story says that the mojito was invented aboard Drake’s ship to relieve fever and colds from tropical illnesses. This is doubtful, as South American natives were known to curate such remedies long before Drake’s arrival. Could it be that Drake dropped anchor in Cuba to gather these ingredients for medicinal uses, not to pillage the city’s riches? We may never know. What is certain is that the mojito was indeed consumed for its perceived medicinal value. During a nasty cholera outbreak in 1833 Havana, writer Ramon de Paula wrote, “Every day at eleven o’clock I consume a little Drake made from aguardiente and I am doing very well.”

All we know is a mojito a day would have us feeling pretty good, too.

It should also be noted that African enslaved peoples who worked the Cuban sugar cane fields in the 19th century often consumed guarapo, the sugarcane juice often used in mojitos. They likely contributed to the drink’s formulation.

Try this classic cocktail for yourself and party like a band of ruthless privateers just set sail away from your island! 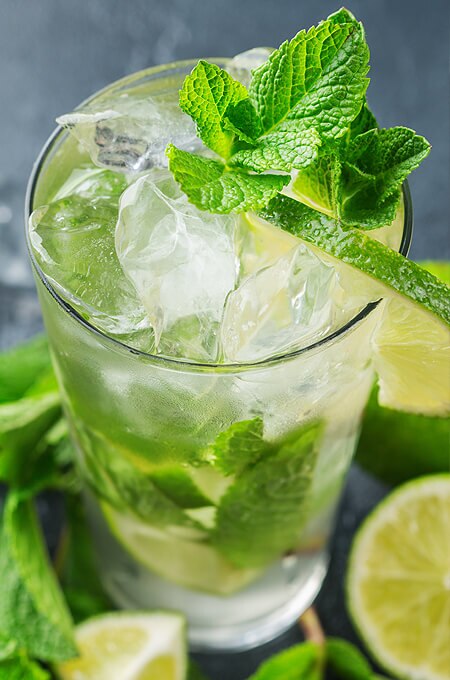 In a shaker, gently muddle mint leaves with lime juice and simple syrup. Add rum and shake once. Pour all ingredients into a tall glass and add fresh ice over top. Top with soda water and stir. Garnish with a lime wedge and a sprig of mint.

This Uruguayan summertime drink is said to come from Britain when they invaded the country and celebrated with a popular drink of the time, the “claret cup.” This cocktail had wine and fruit and was served in claret cups, so people from Uruguay named it “clericot,” also referred to as “clerico,” and added their own touch. Uruguayans enjoy this drink in December during the holidays, which is their summertime. There are different variations of the drink using dry white or red wines and even Champagne. It’s safe to say that this refreshing drink can easily become a go-to for Floridians!

Shop our wine selection for your Clerico here. In a pitcher, whisk together sugar and triple sec. Add diced fruit, red wine or white wine and lemon-lime soda. Stir to combine and chill until ready to serve. When ready, serve over ice.

When discussing Hispanic cocktails, the cantarito is one recipe that often flies under the radar, but it deserves so much more recognition than it gets. This citrusy sipper, named for the clay jar it’s served in, is native to Jalisco, Mexico (yup, where tequila comes from!) and a favorite of the area’s locals.

The cantarito is made with blanco tequila and a variety of citrus: lemons, limes, oranges and grapefruits. Instead of club soda or tonic water, this cocktail is topped specifically with Mexican grapefruit soda for sweet, tangy bubbles. Don’t forget to rim your clay cup with tajin for the perfect kiss of spice!

Learn a little bit more about the cantarito in our video below. Fill a tall glass with ice. Add cola and Fernet-Branca. Stir gently and garnish with lemon wedge or twist.

However you choose to celebrate, we hope that you get to enjoy these cocktails throughout the month and beyond. SALUD, AMIGOS!